There are over 500 species of sharks swimming in our oceans. While there are fewer than 100 unprovoked shark attacks each year, that doesn’t stop humans from often irrational fear which has swept the globe since Jaws was released.

In reality, you’re much more likely to be killed by a strike of lightning than by a shark. Shark attacks are typically accidental. Most often, the shark believes the human to be some sort of prey, like a seal, and once it realizes its mistake simply lets go and swims off.

With that being said, here are the top 8 most dangerous sharks.

The subject of the film Jaws, the great white shark is responsible for the most recorded unprovoked shark attacks at 326. 52 of these attacks were fatal. The largest predatory fish on earth, great whites grow to fifteen feet on average. And they were built to kill, having evolved to hunt seals. With the ability to swim up to 35 miles per hour in bursts and teeth growing almost three inches long, it’s not surprising that the great white is so fascinating and terrifying to humans.

Second on the list is the tiger shark. Responsible for 129 unprovoked attacks, 34 of which were fatal, the tiger shark has had its fair share of run-ins with humans. At an average of twelve feet these animals are still massive, and another of the largest sharks on the planet. Tiger sharks feed close to shore at night, and they’re known for hunting a wide variety of prey including fish, seals, birds, and even other sharks. They’ve been documented eating garbage like tires, nails, and license plates, too, so we know they certainly aren’t picky.

Rounding out the big three of dangerous sharks, we have the bull shark. Bull sharks have 116 unprovoked attacks on record, 25 of which were fatal. Bull sharks will literally eat anything, Bull sharks are a particularly terrifying species because of their ability to survive in fresh and brackish water. They’ve been known to travel thousands of miles up rivers, and they also notably inhabit a golf course lake in Australia. Talk about a dangerous water hazard! 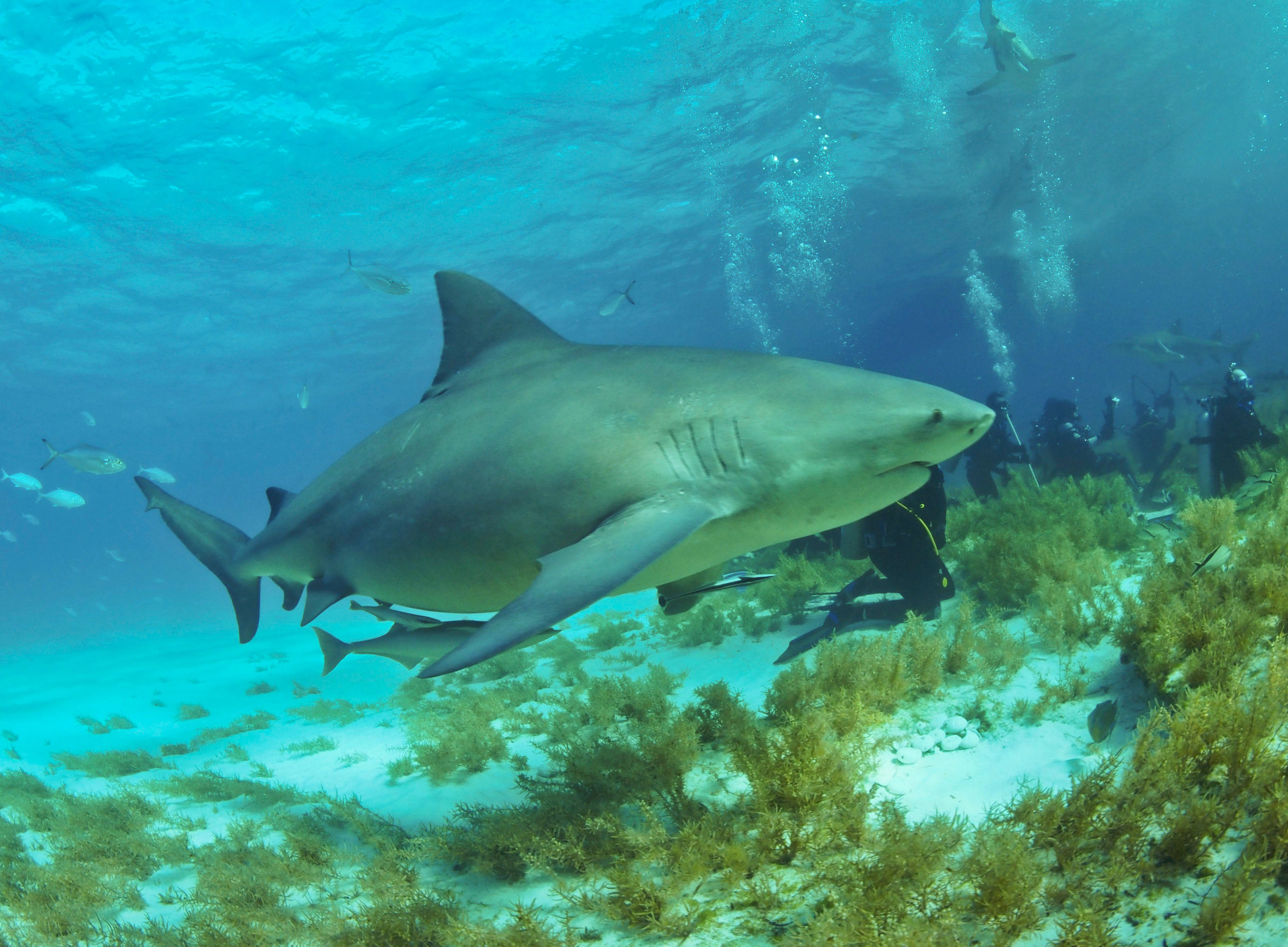 Outside the top three, it becomes more and more unlikely that a shark will attack humans. Oceanic whitetips have only 15 confirmed unprovoked attacks with 3 fatalities. However, they are widely accepted to be the primary culprit in the most deadly shark attack in history, when sharks swarmed hundreds of sailors, dead and alive, after the USS Indianapolis sank in the Pacific. These sharks spend their time at the top of the warer column and are thus often involved in attacks on sailors adrift. The population of oceanic whitetips is on the decline due to overfishing.

While shortfin makos are implicated in only a low number of unprovoked attacks, these impressive, toothy predators often bite fishermen. Shortfin makos also have the second most attacks on boats, after only the great white, with the ability to do some serious damage when hooked. Capable of speeds around 50 miles per hour, these hunting machines also happen sto be the fastest sharks in the ocean. 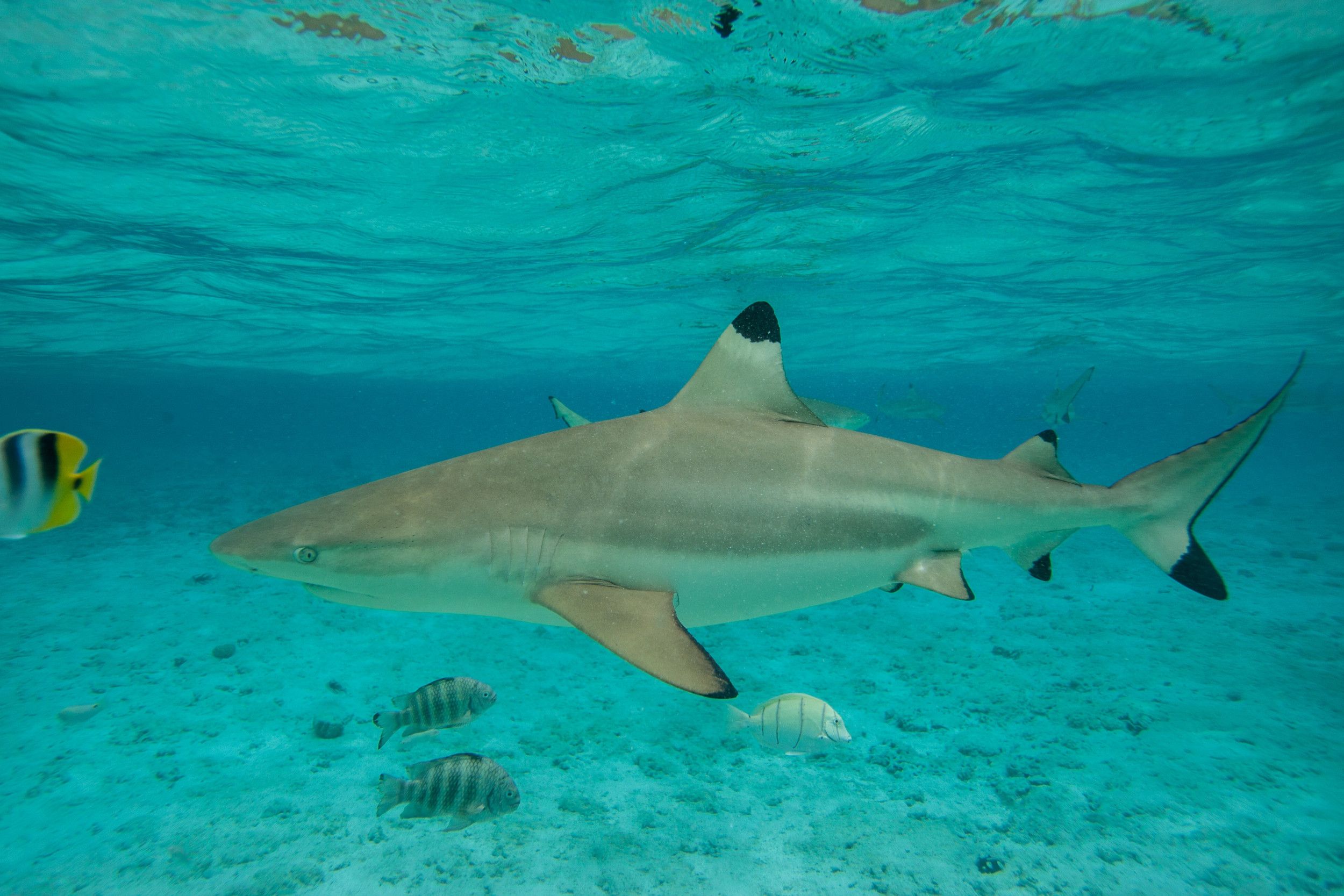 The hammerhead shark makes this list based almost solely on its intimidating stature. Averaging around thirteen feet in length, these unique predators have been responsible for 15 confirmed unprovoked attacks. Their tendency to swim in shallow water makes them even more feared by beachgoers. Hammerheads have been recorded hunting blacktip sharks in extremely shallow water right near the beach.

Rounding out our list, we have the sand tiger shark, which has had 35 confirmed unprovoked attacks on humans. Especially frightening due to their protruding teeth and tendency to patrol shallow waters, the sand tiger shark is actually not particularly aggressive, most often attacking when it feels threatened. At an average of eight feet long, you still would not want to encounter one during a beach day.