The Redfish, also known as Red Drum, is a game fish found on the Atlantic Ocean coastlines of the United States. A Redfish can be identified by having one or more “eyespots near the tail and having a red-colored back which proceeds to fade to a white belly. The Redfish species is very popular for fishermen and are prized as food for its light flavor.

Redfish prefer very shallow water ranging from 1 to 4 feet and can be found in water so shallow that their backs are exposed above the water line. The fish also prefers to reside in bays, oyster reefs, coves, and lagoons, around seagrass and other natural vegetation. The Redfish can be found on all bottom types but have a preference for mud bottom. They can also be found using man-made structures such as old piers and jetties. 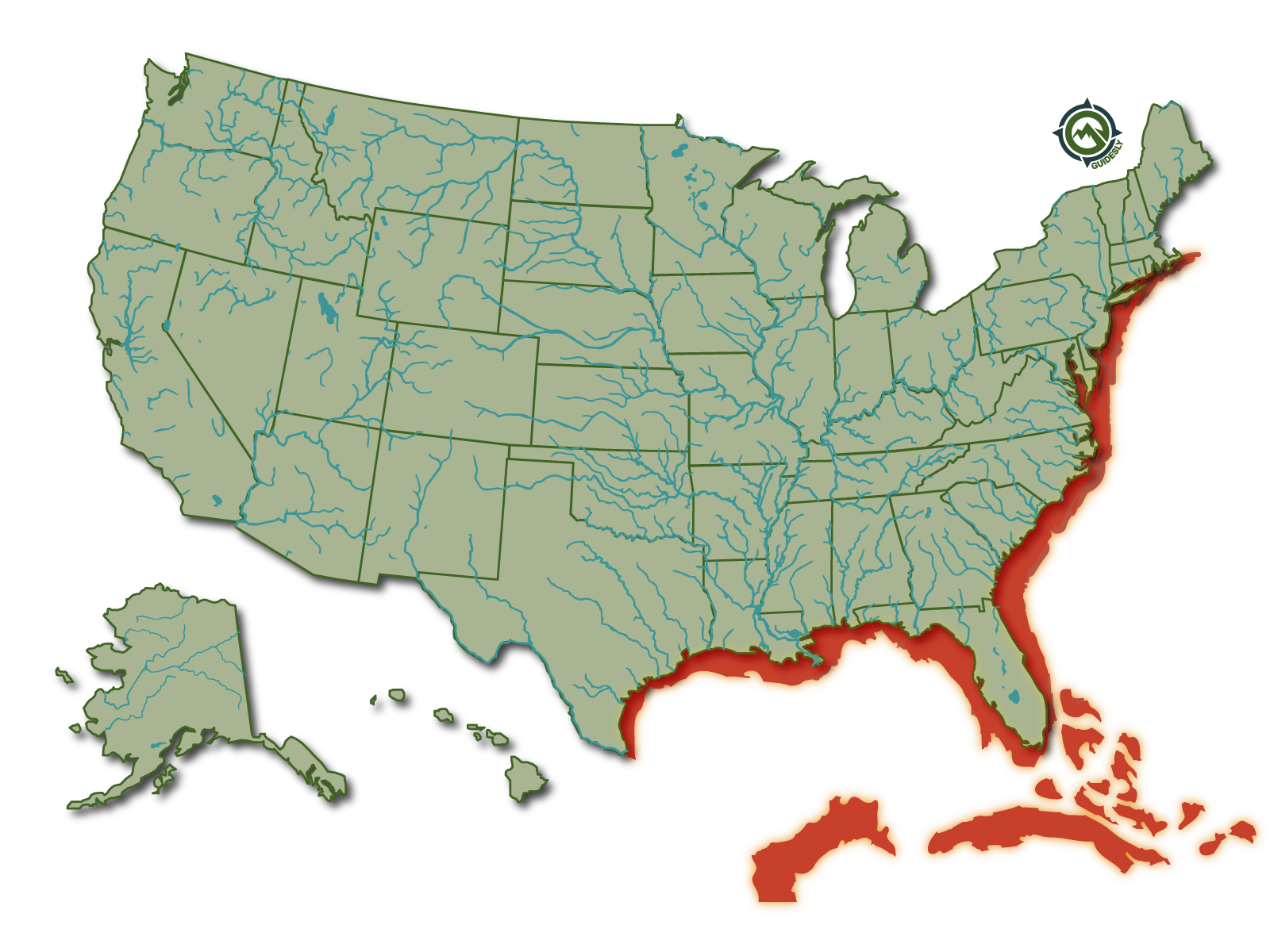 Redfish inhabit the shallow, coastal waters of the Atlantic Ocean. The range of the Redfish stretches as far north as Massachusetts, down the coast to Florida and the Gulf of Mexico to northern Mexico.

Redfish can vary in size depending on location, the larger ones being found offshore, and smaller ones found closer to the coastline. Redfish grow to maturity within 3 to 5 years, and at that time, the average size is around 28 inches for males and 33 inches for female fish, but are capable of growing much larger into the 45-inch range and weighing 50 pounds.

The world record redfish was caught off the coast of North Carolina and weighed in at 94 pounds 2 oz.

Redfish have a distinctive black spot near their tail, which acts as a defensive tool against predators, fooling them into attacking their backside so they can make a quick getaway.

The Redfish have a life span as long as 40 years and actually stay near the place they were born, living in a reasonably small home range in shallow flats and estuaries.

A female redfish can lay anywhere from 1.5 to 3 million eggs in a single batch When the eggs hatch, redfish grow at a rate of about .02 inches a day, but these rates can vary due to location and year.

Redfish are considered a protected game fish and regulations have been put in place to ban commercial fishing, lessening the impact on Redfish populations. Recreational fishing has regulations but still allow anglers to catch Redfish.

Anglers should seek the shallow water areas and flats where Redfish tend to congregate, using shallow lures and prey imitations. Predominantly shrimp is preferred when using live bait. Fly fishermen also find fishing for this type of fish rewarding due to its preferring very shallow water. The fly fisherman can see the individual fish and precisely put flies in front of them.

Anglers should seek the shallow water areas and flats where Redfish tend to congregate, using shallow lures and prey imitations. Predominantly shrimp is preferred when using live bait. Fly fishermen also find fishing for this type of fish rewarding due to its preferring very shallow water. The fly fisherman can see the individual fish and precisely put flies in front of them.

Redfish anglers have a plethora of lures to choose from along with live shrimp for bait. Topwater lures fished in the shallow water that Redfish inhabit are an excellent choice and provide anglers with explosive topwater strikes. Lure like the Rapala Skitter walk and other walk-the-dog style baits will provide you with a lot of action. Other lures that work well are floating jerkbaits and crankbaits, and shrimp imitation jigs. For fly fishing, a fly that runs weedless about 3 inches in length works well. You can even upsize your lures to 5-6 inches and single out the biggest Redfish on the flats.