A little bit about our guide / author, John Rogers:

Fly fishing is in John's blood - his father hailed from Western North Carolina with 3 generations of fly fisherman while his Mom was from Manhattan with a father who built a small cabin by hand on the banks of the Beaverkilll in upstate NY. John's first trout was taken at an early age on this famed NY river and he's brought several thousand more to hand in Western Carolina, NH, VT and places beyond over the years. As time went by and opportunities presented John pursued trout across the globe, from the Western American rivers, creeks and high altitude lakes to the rivers and streams of Labrador, New Zealand and Europe. Some of his escapades and fish have been chronicled in the Orvis News and American Angler Magazine.

For the past 20+ years the third week of November was sacrosanct.  Each year you would find me in Pulaski NY with anywhere from six to a dozen buddies chasing the fish of a thousand casts.  My brothers, first cousins and a mismatched assortment old high school buddies, old pastors, work friends, etc. all with one thing in common, a love for the outdoors and excited for the chance to connect with a slab of lake Ontario Chrome otherwise known as Great Lakes Steelhead Trout (Oncorhynchus mykiss).

This year (2020), my annual trip like most other traditions become extremely challenging to coordinate and in the end the trip ended up getting canceled due to travel restrictions, work policies and rightfully uptight spouses who unlike most of us did not see steelhead fishing as essential travel.

Totally depressed post-Thanksgiving, I reached out to my old high school buddy Rob who I’ve know for 42 years and said come on man, let’s make a commando run to Pulaski.  We’ll stay at the efficiency apartment at the School House Inn, pack in our own supplies and if all goes well the only thing we will come in contact with is fresh fish just into the river system from Lake Ontario.  It didn’t take much arm twisting and my buddy Robby was in.

We rolled-up to the ramp at Altmar at 6:30AM on December 9th thinking we would be respectfully late to the ramp to let all the working guides get in the river first but to our surprise we were the second boat at the ramp.  It was still dark so I guess the boats where running on our schedule.   We dropped my SmithFly drift boat in the river and where underway just as the black of night yielded to that pre-dawn blue color.

Rob was on point and I was on the sticks.  The plan was for him to fish until he hooked and fought a fish and then we would switch.   Steelhead are most active on the day edges - dawn and dusk, so we knew the first 90 minutes of the morning was clutch.

Before we got 20 feet down river a fisherman wading in to the pool below us was into a fish.  It looked like a good one, I feathered the oars holding the boat a safe distance up-steam while he played this fish.  After several minutes, the fish bolted down stream and he couldn’t turn it. When you hook a large fresh steelhead, still the color of your truck bumper, the fish dictates the tempo and when they hit the exit button and decide to make a super charged run west back toward Lake Ontario there’s just about nothing stopping them – especially when you’re on 6 pound tippet.

After watching that fish jump, run and school that wade fisherman Robby and I didn’t need any more coffee it was game on.  After that very encouraging start for the next hour we didn’t get a bump, we floated a mile and a half of good water and nothing.  Two other guide boats where trading places with us in the river and they reported the same.

As we moved down the river Robby and I decided the fish where not in their November holds and surmised given the cold we had better adjust to slower moving pools where fish as their metabolism slowed would tend to gravitate.   This was some high thinking for two graduates of Gilford High in central New Hampshire more adept to playing quarters and working on muscle cars than high level math and strategic planning.  Nonetheless with newfound resolve we pushed our drift boat to the Trestle pool a half mile down river with the perfect winter holding water.  We passed the other two guide boats and got there first, dropping anchor just off the head of the pool.   Getting impatient, given we are now over two hours into a four-hour float and I hadn’t made a cast, I pulled my 11 foot 7 weight out of the quiver and joined Robby in fishing the pool from the middle guide seat.

Just about three casts in an old timer and what appeared to be his son popped-up from the woods and where a bit surprised and dismayed to see us in their favorite pool – perhaps they had reached the same epiphany as we had regarding winter holding water.    While they took a secondary position along the bank Robby and I began hooking fish.  The first one was a bright, big steelhead and he tale walked across the pool and then bull charged me so fast I couldn’t take back line quick enough, lost tension and soon after the fish.  Both the old timer and son edged a little closer to us. Fifteen minutes later Robby hooked another big bright fish but after two jumps and an upstream charge he got his fly back.  Then again, I was on with a fish this one was a 6-7 pound hen that when I hooked her she just held in the current for close to a minute before all hell broke loose.  That fish took me all over that pool but after several brilliant runs we eventually brought her to net.  She was taken on a pink salmon egg.  After landing the fish, photographing and then resuscitating the fish I looked up and the old timer and his soon had moved so close I could see he had missed a button on his shirt.

You know trout fishing is a pristine sport for the most part and people respect each other’s space – however, I have learned this decorum doesn’t translate to steelhead fishing in Pulaski.   For most folks the fish of a thousand casts and perhaps a fish of a lifetime is too enticing to honor someone else’s space.   In years past I would have run this guy off but these days especially after Rob and I just took four fish out of the pool he had humped down a steep bank to reach, I had surprising compassion for the man and his boy.    I hooked a fifth steelie in the same spot and this time the fish blasted across the river directly at our close neighbor and literally put a shoulder into him before blasting down steam and out of sight.  You know sometimes it better to let the fish do the talking...

The Trestle pool served us well that day and as Robby and I decided to float on down river we couldn’t help but feeling a little smug about the steel heading clinic we had just put on and the fact our minds where still nimble enough to think like a fish and shift to winter holding spots instead of the November sections we were accustomed.

Perhaps some of you are thinking and most certainly our wives would have been quick to point out you two are not so smart, its mid-December after all its snowing hard and temps are in the mid 30s - it is winter! And this is why for the past 20+ years wives have not been invited to Pulaski. 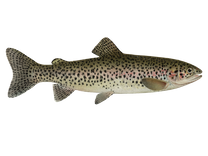