7 Questions About Sharks That Have Never Been Answered

As famous as they are, there remain several mysteries concerning sharks. Ever since they were propelled into the limelight during the mid-late 70s, several questions about their behavior and nature remained unanswered. The answers to questions such as: “How many sharks currently exist?” “How do they navigate the ocean?” or even “What they do aside from eating and swimming?” continue to elude scientists even to this day. The difficulty in answering these questions stems from the fact that sharks fare poorly in captivity, and observing them in their natural habitat is often very difficult.

In this article, we will discuss the answers given by scientists to some of these mystery questions. Do note that these answers aren’t definitive and could change when new information becomes available. These are just the current explanations that scientists have come up with to answer these mysteries regarding sharks.

1.How Many Shark Species are There?

Despite, or perhaps because of, existing for over 400 million years on Earth, it is difficult to answer how many shark species there are. - -. Currently, over 500 species of sharks are known to man, with many more being discovered each year. These species vary in habitat, body shape, and even diet that no two species are the same. And you thought they couldn’t be any more amazing?

When people think of sharks, the picture that comes to mind is of a fish like the great white or bull shark. This means a fish with a large, torpedo-shaped body and a mouth filled with razor-sharp teeth. If not that, they’ll think of something like a hammerhead or bonnethead shark. These images close one’s mind to the fact that both the whale shark and goblin shark are also considered to be sharks. And some species like the great white and whale sharks are massive, while others are just as large as the length of a human arm. Some go after large fish like the tuna, and others prey on small fish or plankton. In short, sharks are as varied as the environments they call home.

2. How Do Sharks Navigate?

Another question that continues to puzzle scientists is how sharks make their way into the ocean.- In the past, it was unclear how sharks navigated because the ocean is both vast and lacks visible directional signs. Today, scientists believe that the answer lies with the Earth’s magnetic field. In a recent study, they discovered that sharks use the Earth’s magnetic field as some sort of natural GPS to orient themselves whenever they travel long distances. Not only that, they seem to use it to map their surroundings and keep them oriented on where they’re going as well.

3. Why Do Sharks Migrate?

The first factor is reproduction. There are shark species that travel from one place to another so that they can mate and give birth. The sandbar shark is an example of this. This shark is most commonly seen in Florida during the spring to mate, then moves northwards to give birth and return to the south when winter comes.

The next factor is food. As some of the fish that sharks feed on migrate around the world, the sharks follow them as well. This is also connected to seasonal temperature changes in the water, as some of their prey travel to warmer waters during the winter or spring. To survive, sharks then must follow their food sources from one place to another to eat.

The last and most significant factor for why sharks migrate is seasonal temperature changes. Because most sharks are cold-blooded creatures, they need to swim in warmer waters to maintain their body temperature. Some get around this by having a higher metabolic rate that allows them to produce their body heat, such as the great white.

4. What is the Shark’s Role in the Ecosystem?

Because they are the apex predators in marine ecosystems, sharks play a key role in preserving a healthy structure of the food web in the ocean. First of all, what do we mean when we say apex predator? An apex predator is a species that has little to no natural predators and feeds on the other creatures below them in the food web. Sharks dictate how their prey moves in the ecosystem and limits their population as well. They also protect smaller species of fish living in coral reefs from smaller predators, thus preserving both smaller fish populations and the coral reefs themselves. In a way, they help maintain the balance in their ecosystem, and to lose them means the destabilization of the rest.

5. What Do Sharks Do Underwater?

Okay, this might sound silly, but one thing that scientists also don’t understand about sharks is their activities underwater. Scientists could track their movements in the water, but without actually going there and observing, they can’t know exactly why they do the things they do there. For example, scientists are still not sure how sharks sleep when they have to constantly move, or else their gills won't be able to filter the air in the water, causing them to drown. One answer is that sharks don’t fully sleep the way humans and other animals do. Instead, they’ll enter a “rest” mode where they can still move, but they’ll slow down and rest the other parts of their body.

Another curious activity of sharks is why they dive deeper into the water, sometimes up to 3,000 feet below the surface. Great white sharks have been known to do this in the middle of the Atlantic, but researchers can’t get close without disrupting them. Is it because they’re trying to catch bigger prey there? Or perhaps it’s a means to maintain their body temperatures? Nobody could say for certain.

Once again, this seems to be a rather straightforward question. But the answer is more complicated than a simple yes or no. Before more research was done to study their social behaviors, sharks were thought to be loners. They rarely interacted with one another and usually could be found swimming alone in the ocean. This may be true for some shark species, but recent studies have now shown that some sharks are more social than others.

There are shark species, such as the gray reef shark, who form groups of up to 20 sharks. They might be doing this because this allows them to better hunt prey together. Even great white couples are known to stay with each other for a long time after mating. When conflicts arise between sharks of the same group, they will do rituals and shows of dominance to establish the hierarchy between them.

7. How Smart Are Sharks?

Okay, let’s get one thing straight, sharks are no Einsteins, but that doesn’t mean they’re brutish creatures either. They possess a bigger brain than some animals and are capable of complex behaviors, such as complicated social interactions and even problem-solving. Sharks have a more developed sense of smell that allows them to track their prey across the water, even at longer distances. As to whether they could rival dolphins intellectually, the short answer is they can’t. The thing is, they don’t need to, as they’re more than capable of achieving equally impressive feats as well. 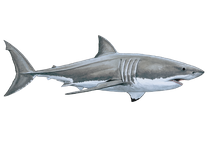