Shark Week: Everything you wanted to know (Well, Almost…) 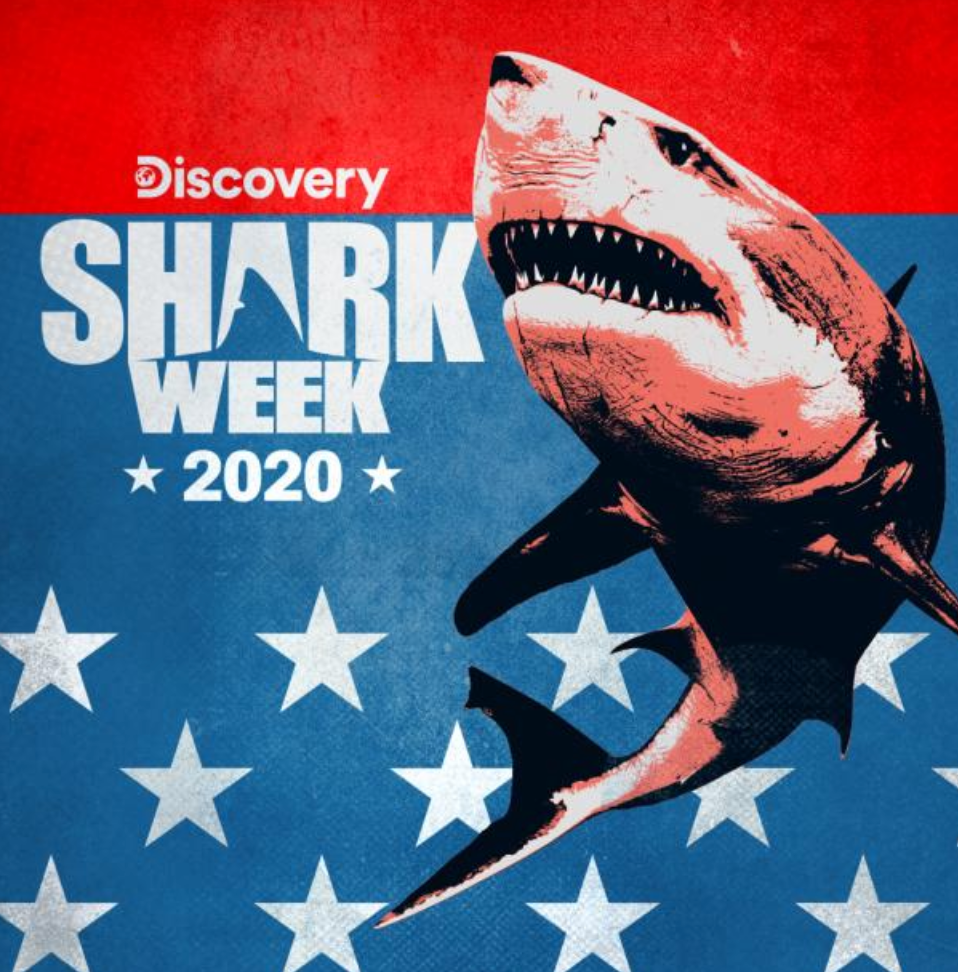 Yes! In case there’s some remote chance you don’t know yet:

Described by its creator (The Discovery Channel) as “television’s longest-running, and most anticipated summer event,” SHARK WEEK celebrates its 33rd anniversary in 2020 – with a compelling schedule of exciting and Jaws-dropping footage featuring sharks from oceans near and far!

From Sunday, August 9 through Sunday, August 16, 2020, “selachimorphaphiles” (i.e. avid shark enthusiasts-- for those not in the know) can feast themselves on more than 20 hours of new shark programming throughout the week.

For a quick gander at what’s showing when this week, click here or on the calendar below to see Guidesly’s summary of the Discovery Shark Week 2020 Lineup: 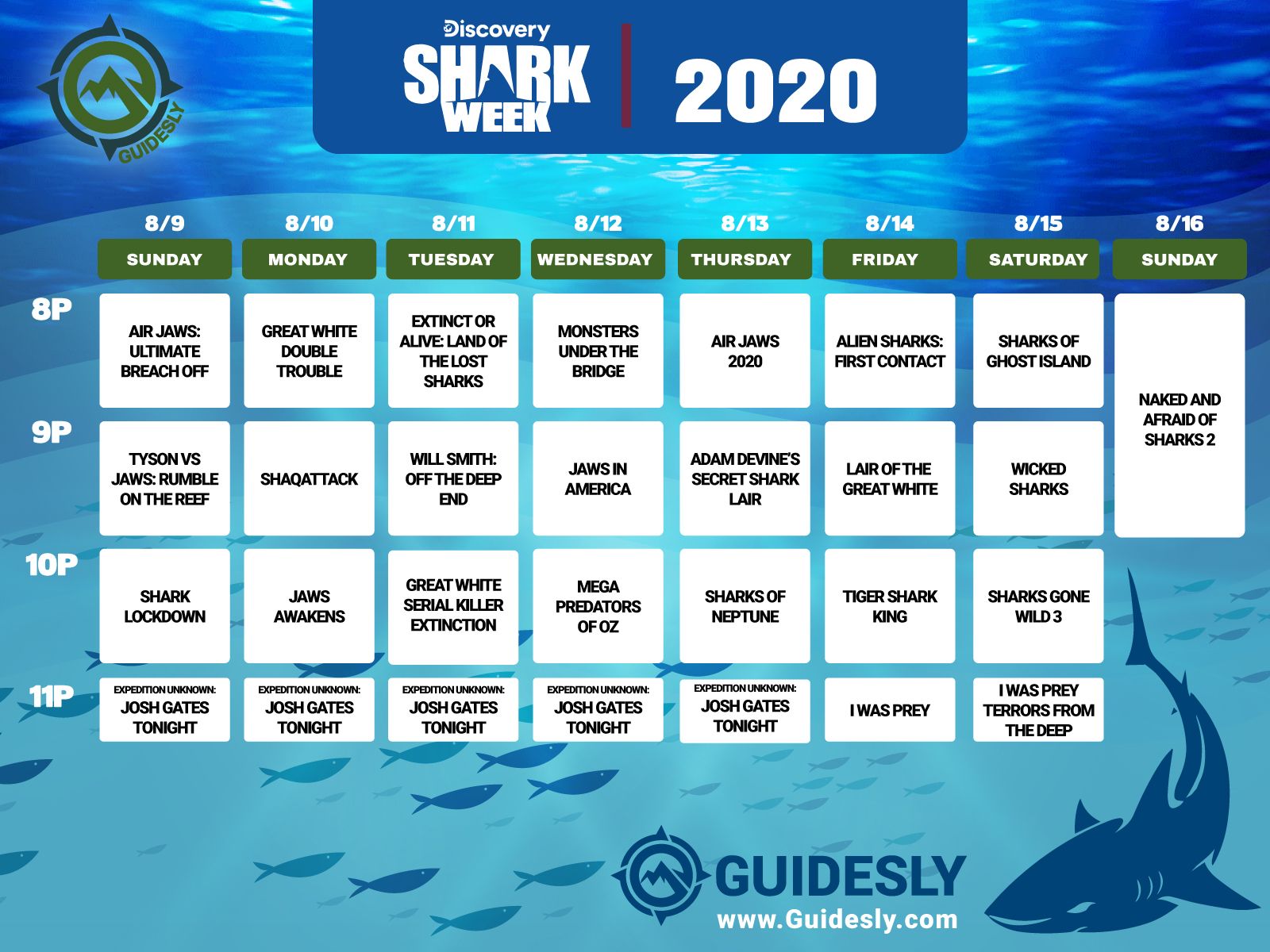 Shark Week -- Much more than TV:

Get Social With Sharks: With a passionate worldwide audience numbering in the millions, superfans of #SHARKWEEK won’t just be limited to watching segments on cable TV, as they can watch and interact with video segments, articles, 3D imagery, and much more served up at Discovery.com and their other social media destinations.

Families can join in the fun this Shark Week through an assortment of activities (courtesy of the creative teams at Discovery Channel’s brands including HGTV, FoodNetwork, TLC): • Kids can fill in their own Shark Week Coloring Page • Cook up some “Shark Bark” (yummy snack made of white chocolate, candy and pretzels) • A Checklist of “Everything You’ll Need to Host Your Own Shark Week Viewing Party”

Sharks ARE a Trivial Matter!

One of our favorite elements of Shark Week each year, is the arrival of new-found Shark Trivia, posted from a range of sources (from commercial sponsors to aquatic nonprofit organizations). 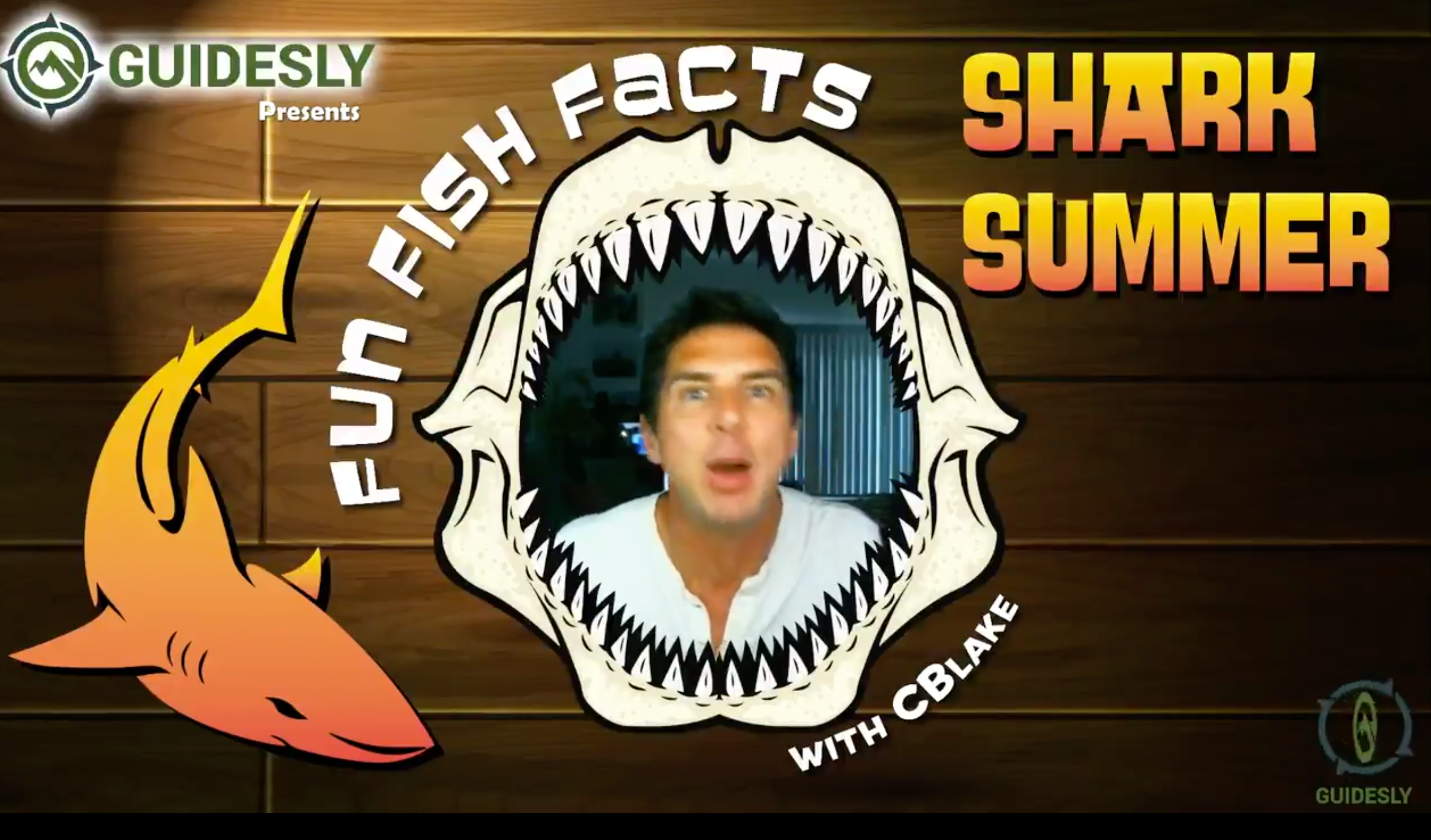 Here, in celebration of Shark Week 2020 are four fascinating fish facts (on sharks) for you:

Q. How many different species are there worldwide? A. Approximately 470 different sharks

Q. What were sharks called before the 16th Century? A. Sea Dogs

Q: How many people died after the sinking of the USS Indianapolis? A: One of the most riveting scenes in 1975 Hollywood blockbuster “Jaws” was when Captain Quint told Chief Brody and Matt Hooper about his survival after the sinking of the US Navy Ship Indianapolis on July 30, 1945 by a Japanese submarine. While 300 of the 1,195 crewmen went down with the ship, only 316 of the nearly 900 set adrift survived the sinking.

**Why did so few survive? ** Rescue planes didn’t see the floating shipwrecked crew until four days after the ship went down. Bobbing at sea with few life jackets and rafts to help them, many sailors died from heat exposure, dehydration, salt poisoning, thirst, and fatigue.

And, as actor Robert Shaw (who played Quint) chillingly described in his 4:05 minute “Jaws” monologue: “The sharks got the rest.”

If you STILL haven’t had your fill of “Shark Stats,” check out Guidesly’s recent article: “18 Facts About Sharks You Might Not Have Known”.

Beyond Celebrities to Conservation!

Sure, avid followers of Shark Week rave about amazing shark footage, and its amusing, on-camera up-close shark encounters of celebrities (including Mike Tyson, Will Smith, Shaquille O’Neal, and Snoop Dogg), but…

While “if it bleeds it leads” continues to be a sure-fire formula for local TV news to win viewership, The Discovery Channel deserves recognition and kudos for ensuring that Shark Week is much more than sensational, gruesome video!

Since its inception, Discovery’s Shark Week has stood out as a prime-time example of an entertainment platform whose coverage and support for marine conservation sets a laudable example for other major networks to follow.

As the black cats of the ocean, sharks suffer disproportionate popular prejudice from a fearful public who’ve been misinformed by watching decades of creature feature horror films, from the Jaws and Sharknado franchises to Deep Blue Sea, 47 Meters Down, and 2018’s The Meg.

Despite their popularity at the box office and among Guidesly’s editors, many of these shark-centered movies perpetuate myths about sharks including these outright-wrong misconceptions: • All sharks are big with huge teeth • The world would be better if we killed every shark • Sharks attack humans often • Sharks are hungry man eaters looking for any chance to attack**

Reality check: ALL of these myths are FALSE!

Fortunately, for more than 20 years, the Discovery Channel has sought out and featured respected marine biologists and shark conservationists who go on the record and on camera to tell the truth about these extraordinary animals.

Beyond showcasing aquatic experts’ perspectives on the true impact and value of sharks within aquatic ecosystems, Shark Week has set a gold standard for non-fiction documentary programming in calling out shocking threats faced by these underwater wonders.

**It’s a tragic and unknown reality that humans are more dangerous to sharks than they are to people! Last year (in 2019): just 5 people died from shark attacks worldwide, while humans kill about 100 million sharks every single year, making us their biggest threat!

A principal cause of the death of sharks is demand for their fins, which are made into soup and eaten as a status symbol. Demand for shark fins has led to overfishing and illegal fishing, depleting shark populations worldwide, and even more cruelly: fishermen toss sharks overboard after fins have been removed, whereafter they sink and drown since they can’t swim without their fins.

As the World Wildlife Foundation points out “Sharks are a critical part of the marine environment and must be protected.” Given sharks’ important role in maintaining the delicate balance of life in the oceans, international and national governments, as well as the world’s fishing fleets need to align to monitor and ensure sustainable fishing practices.

Happy Shark Week one and all:

Don’t forget: this week is actually the safest time to go to the beach, because all the sharks are busy being on TV!