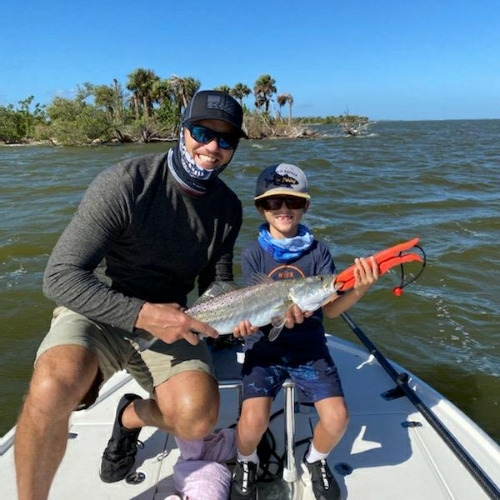 About The Indian River Lagoon

The Indian River Lagoon is an estuary made up of three main water bodies - Mosquito Lagoon, Indian River, and Banana River. Located on the Atlantic Coast of Florida, the lagoon is long and narrow, with a width varying from .5 and 5 miles. It stretches for 156 miles, starting from Ponce de Leon Inlet in the north all the way down to Hobe Sound in Martin County, Florida. With over 4,300 species of flora and fauna, the Indian River Lagoon is recognized as one of the most biodiverse habitats in the Northern Hemisphere and was declared an Estuary of National Significance in 1990.

All About Fishing in the Indian River Lagoon, FL

Distinct ecosystems in the lagoon include various wetlands, forests, seagrass, shorelines, and spoil islands. The water body is a mix of freshwater from streams, canals, and rivers, and saltwater from the Atlantic Ocean that comes in from various inlets which include the Fort Pierce, St. Lucie, and Jupiter inlets. Water temperatures in the northern part of the lagoon are warm-temperate while the waters in the southern portion are subtropical. Unlike natural rivers where water flow is influenced by gravity, the estuary’s water flow is driven by wind and minor tidal activity from inlets. The waters have an average depth of 4ft with flats less than 2ft deep.

The lagoon’s biodiversity makes it a prime area for anglers to get their catch. Its salt water marshes serve as nurseries for juvenile game fish and other species. The lagoon is home to many species of game fish including seatrout, redfish, snook, tarpon, ladyfish, bluefish, and mangrove snapper. Many of these feed on crustaceans such as mullet, shrimp, and crabs.

Because the lagoon has many shallow flats, wading is a viable option, but be sure to wear boots to avoid making contact with a stingray. Many anglers are also partial to using kayaks and flats boats when fishing on the lagoon. Those looking to experience true Floridian fishing often have their sights set on catching redfish. These insatiable eaters dwell in the shallow, grassy waters of the Indian and Mosquito Rivers, feeding on small crustaceans. You can catch them inshore with various bait species as well as small topwater plugs and artificial baits. With flats fishing, the important thing to remember is to be stealthy as fish in shallow areas can spook very easily.

The best flats to look for fish are in seagrasses. If you’re looking to fish in other areas, you can find species such as snook, grouper, trout, tarpon, and mangrove snapper under docks and near sea walls. Snook in particular favor swimming south of Port Canaveral in Brevard County. Fishing at the lagoon can promise large catches, so make sure