One of the least populous counties in all of New York State, Lewis County is a lush and beautiful area in the northwestern part of the state that’s dotted with breathtaking natural views. Its county seat is in the town of Lowville, which is itself known for the majestic Whetstone Gulf State Park, a state park built around a three-mile-long gorge east of the Rocky Mountains.

Today, Lewis County promotes itself as one of the most livable places in the state, promoting quality of life by boosting both its economic opportunities and recreational facilities. Ironically, though, the county wasn’t always as popular for residents, despite its rich natural resources. Until the end of the 18th century, very few people called Lewis County home. It remained unsurveyed for a long time until it was eventually purchased by John Brown during the Macomb’s Purchase of 1791.

While not as popular as many of the counties that surround it, Lewis County thrives well on its own. It is home, after all, to the largest milk production in all of New York State and is the largest producer of maple syrup, so you may as well say that life is sweet in this part of New York. Not only is it sweet; it’s also quite rugged and green, surrounded as it is by the Adirondack Park on the east and the Tug Hill Plateau on the west. It does indeed offer the best of both worlds not just for its residents but for travelers who dare to go off the beaten path.

Lewis County offers plenty of freshwater fishing opportunities in its rivers and lakes. It is a worthy addition to your New York State fishing bucking list, especially if you’re around the area during spring and winter.

Freshwater fishing opportunities abound in Lewis County; you just have to know where to look. The region itself is known for being quite rugged and remote, so the services of a local guide who knows their way around should benefit you, especially if it’s your first time in the county.

When in Lewis County, best to explore the many fishing options you can have at the Tug Hill Region. It has over 3,000 freshwater bodies that are regularly stocked and teeming with aquatic species, especially warm-water fish. If you’re keen to target rainbow, brook, lake, and brown trout, then head over to Ausable River which is in the village of Wilmington, known as the fly fishing capital of the Adirondacks, and Chateauguay River, particularly in its falls and eddies. Other trout waters in the area worth your bucket are the Lost Pond, Lake Colby, Otter Lake, and Bullhead Pond.

Northern pike is yet another species you should watch out for in New York State, and the Tug Hill Region is no different. Several lakes here nurture trophy size pike, especially Lake Gorge, Schroon Lake, Tupper Lake, and Long Lake, among many others. But if you want to increase your chances of landing that trophy, take a chance at the Great Sacandaga Lake, which reportedly offers 20-lbs. pike regularly to passionate anglers.

No freshwater sportfishing is complete without walleye. These trophy species are popular in this part of New York State, both as a challenging catch and as table fare. Catch them in the major watersheds in the state, and in the Tug Hill Region, find them in lakes such as Tupper Lake and Great Sacandaga Lake, where they are sure to be in healthy populations and active.

The rest of Lewis County offers plenty more freshwater fishing opportunities. The Independence River Wild Forest, which covers at least 76,000 acres within the Adirondack Park area, contains many water bodies that offer quite productive fishing. Some of its small streams have native brook trout, while creeks and lakes such as Otter Creek and Payne Lake are stocked with brown and brook trout, respectively. The trout here in these waters are best targeted along the shoreline where there’s plenty of cover at the start of the season. Payne Lake, in particular, also offers largemouth and smallmouth bass, northern pike, yellow perch, bluegill, and black crappie. In the shallow and weedy water bodies such as Francis Lake, you can find chain pickerel, bullhead, and yellow perch, many of which can be caught along the weed lines from the shore, as well as from the edges of the water lilies in the marshlands.

Another productive fishing river that passes through the Lewis County region is the great Black River. This river is right between the Tug Hill Plateau and the Adirondack Foothills and serves the counties of Lewis, Jefferson, and Oneida. In the Lewis County region itself, it runs for 73 miles. From the county line toward Lyon Falls, there’s a prime fishing section that’s 8.5 miles. This waterway is regularly stocked with brown and rainbow trout. Downstream from the falls, you can target plenty of walleye, northern pike, chain pickerel, and smallmouth bass. On the upper part of the river, you can enjoy some fly fishing in areas that are easily accessible via the many hand and trailer launches.

Even more Adirondack waters that provide productive fishing in the area include Long Pond, which you can access northwest of Croghan, via a state-owned beach launch on Prentice Road. Brook trout are the most popular catch here in Long Pond. They can be targeted near the shore at the start of the season, but as the waters get warmer, they can be found at the thermocline and are best caught trolling with a weighted line. Another Croghan water body of note is Clear Pond, located northeast of the village. This pond can be accessed via the hand launch site off Long Pond Road and offers brook trout, brown bullhead, and golden shiner in its waters.

If you still can’t get enough trout fishing, make a beeline for the East Branch Fish Creek State Forest, a 1,350-acre park spanning the towns of Osceola, West Turin, and Lewis. The upper part of this branch of the creek is stocked with brook trout. Other species that can be targeted in this rich state forest include rainbow and brown trout and Atlantic salmon. 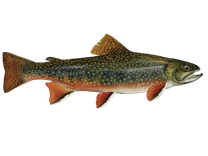 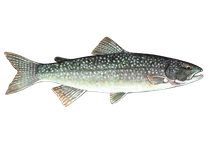 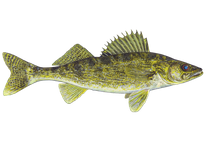 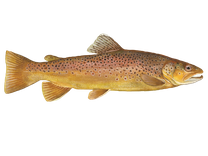 Spring is trout fishing season in the Adirondacks. The season for this species opens on April 1, but local anglers would advise waiting out the season until the ice melts, especially in the spots up in the mountains. Late April or early May would be the best time to get here to target trout. Do note that for inland streams and rivers across New York State, a year-round catch-and-release regulation has been enacted for brook trout, rainbow trout, and brown trout which anglers can catch with artificial lures only.

Winter is another great time to fish in the region. Ice fishing is a way of life here and so you can expect to find many frozen lakes and rivers that are open for this particular fishing technique. Come here anytime from mid-November to mid-March to fish for some northern pike, pickerel, tiger muskellunge, and walleye under the ice. Just make sure the ice is thick enough for safe fishing.

Immerse in the Rustic Beauty of Lewis County

Lewis County is a natural wonderland offering scenic sights and unique local experiences all year round.

Lewis County has so many water bodies that it may prove confusing where to start. Book a local guide that can help you narrow down your choices and steer you towards the most productive waters.

Maple syrup is a source of local pride here in Lewis County, so when in this part of New York State, never leave without trying some and taking a bottle home. Check out family-owned maple sugaring operations such as Bechard's Sugar House, Brandy Brook Maple Farm, and Parker Family Maple Farm to taste this local delicacy.

Visit the Largest McIntosh Apple Orchard in the World, Chazy Orchards. This historic orchard produces almost 300,000 bushels of this delicious apple variety, among other varieties such as Honeycrisp and Cortland.